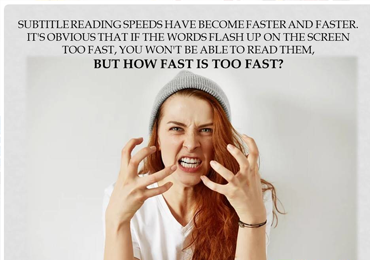 Standards for subtitling are going global, but what is a good standard?

Over the last 30 years, subtitle reading speeds have consistently become faster and faster. It's obvious that if the words flash up on the screen too fast, you won't be able to read them, but how fast is too fast?

While the focus should be on facilitating content reception for the viewer, we may instead be giving them unnecessary cognitive load. Subtitles compete for attention with the image and for overall cognitive resources.

The six-second rule has been widely accepted as rule of thumb for 'readable' subtitles. According to this rule, a full two-line subtitle should be displayed for the maximum of six seconds – not less, because viewers will not have time to read the subtitle, but not more, as they will re-read it if it is displayed longer. The 6-seconds rule translates into a reading speed of 12 characters per second (cps). Many content providers now recommend 15 cps (180 wpm): Many content providers now recommend 15 cps (180 wpm), and some allow a speed as high as 22 cps.

What are these recommendations based on? Estimated reading speed of an average local language native speaker? Or is it a lack of insight into the difference between Closed Captions created for the hearing impaired, combined with poor understanding of the added demands on viewers’ cognitive processes?

Today, subtitlers usually translate from ‘English Master Templates’, originally prepared for the hearing impaired and then slightly modified into subtitles. In the 1980s and early 1990s the text was shortened and edited, and a reading speed of 12 cps was the norm. Today English templates barely leave out any text at all, and the reading speed has consequently moved towards 20 cps or more although empirical research on reading speed identify the ‘six-seconds’ rule as most widely accepted by viewers.

As the industry works towards a global standard to simplify interoperability, consistent rendering, and conversion to other subtitling and captioning formats, we must not forget our raison d'être; making movies and TV programmes enjoyable to audiences across borders.